As we dashed into the hotel lobby, shivering from the freezing wind of a chilly Denver night, my friend and I looked at each other and laughed—remembering the great day we had had.

We were conference presenters together and followed the morning’s proceedings with a calming afternoon of wine, massage, tea and friendship—after briefly visiting a reception for speakers at the conference.

I am a psychologist and TFT practitioner in Los Angeles, and my friend is a forensic nurse with more than 20 years in the medical field.

As we took off our coats, she sighed and revealed, “This cold really makes that pain in my arm hurt like a son of a gun.”

Never having heard her mention it before, I asked, “What pain?”

And with that innocent question began one of the most extraordinary TFT treatment sessions of my career.

As it turns out, my friend had quietly lived with moderate to severe chronic pain for nearly 10 years. While studying for her Advanced Cardiac Life Support certificate as a recovery room and short stay nurse, she had taken a break and stretched her arms into the air. As her chair unexpectedly flipped backwards, she instinctively extended her right arm to break her fall. Painfully, her right shoulder dislocated, then snapped back into place sending an immediate sensation of electric “nerve like” pain shooting through her arm. It made her hand feel fat, she said, and her entire arm hummed—from her brachial plexus to her elbow to her palm.

For 10 years, that feeling of electrical “zinging” down her arm was present and never went away.

After two surgeries, nine years of physical therapy, a trip to a specialist out of state, eight years of acupuncture, nine years of Pilates, and seven years of massage—plus ongoing home pain management made up of Oxycontin, Vicodin, Flexeril, pain gel, ice, heat and more massages than she could count, my friend still lived each day with the same searing electrical pain running down her arm.

“I’d like to try something with you for that pain,” I said.

And while she went along with what I suggested, I could tell that the cynical portion of her very medical-model brain was trying not to laugh out loud. She told me later she thought the pain would never respond to anything—after everything that she had tried already.

Still, desperate for anything that might improve her condition, she watched carefully as I demonstrated the TFT sequence for pain relief.

Her physical pain was almost unbearable—an “8” on the SUD scale because of the cold weather, she said. Submissively tapping herself on the back of her hand and collarbone without regard or thought that TFT was going to work, my friend unexpectedly said to me, “Wow, was I wrong.”

The pain in her arm was gone!

Within minutes, she no longer had the constant “nerve pain” in her hand, elbow and shoulder. Her hand no longer felt clumsy and fat. Her fingers, though still a bit swollen, began to take on the same color as her other hand. And while she still anticipated pain when she raised her arm or placed her hand in cold water, actually lifting her arm and dousing her hand  caused her no pain whatsoever. She could in fact raise her arm!

Even days later, the pain did not come back. And that was with five minutes of TFT treatment. For the first time, she could look forward to physical activity.

Plus, she used TFT to relieve other conditions that paled when compared to the overarching pain. She wrote me later to say that she was working on lowering her blood pressure, and that by using the tapping therapy, she treated herself for pain and arthritis in her toes. She even healed tinnitus in her ear, she wrote.

While she’s still not sure exactly how TFT works, she’s convinced it works. “I am not sure how or why,” she wrote, “but it does. It simply does.   –  Nora J. Baladerian, PhD –  nora@disability-abuse.com

Want to join the discussion?
Feel free to contribute! 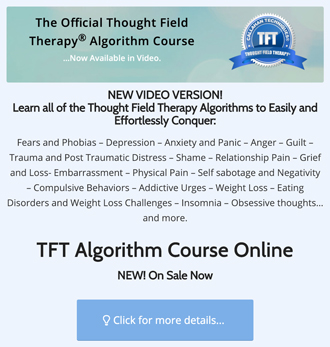